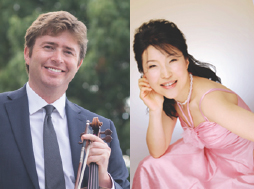 Pacific Crest Chamber Players will be presenting a Violin-Piano Duo Concert “Musical Celebration of the New Year” with violinist Patrick Dalton-Holmes and pianist Chiharu Sai. The event is on January 12 at 7:30 pm. Advanced tickets will be available for $20 online at www.brownpapertickets.com. Door tickets will be $25 for adults and $10 for students under age 25 (at the door only.)

“I am excited to announce … that Patrick and I will be collaborating…. He is one of the most fantastic violinists I have ever heard and have ever worked with. Very heart-centered musician with formidable technique.” – Chiharu Sai

The evening’s program will be:
Vitali Chaconne
Prokofiev Sonata No. 2
Brahms Sonata No. 1

Marked by his expressive power and formidable technique in performance, Patrick Dalton-Holmes has been heard all over the United States, Europe, and Asia as a soloist and chamber musician. He has worked with a number of distinguished conductors including Michael Tilson Thomas and performed with prominent orchestras such as Detroit Symphony Orchestra as well as New World Symphony. Presently, Patrick serves as a member of the Indianapolis Symphony Orchestra while maintaining an active teaching studio in Indianapolis. He is a faculty member of Pacific Crest Music Festival in Dunsmuir CA where he spends his summer working  with gifted young students from all over the world and performing solo and chamber music.

Chiharu Sai, piano
Selected by Japan’s major newspaper, Mainichi Shinbun, as “One of the 100 People in Tokyo to Represent the 21st Century,” pianist Chiharu Sai performs widely as a soloist and chamber musician, both in Japan and the United States.

The renowned critic Harris Goldsmith said of Ms. Sai’s performance of Mozart’s piano concertos, “Ms. Sai proved herself to be a Mozartean of refreshingly unusual potency. She is one of those rarities: an artist who is unafraid to explore the white-hot passion of the Salzburg genius”. Upon hearing Ms. Sai’s performance at Opera City Hall in Tokyo, the music critic Yukiko Hagiya wrote, “This critic wishes that she would cross the Pacific Ocean more often to enthrall the classical music fans of Japan”.

Ms. Sai balances her performance schedule with an active involvement in music education and pedagogy. Since she moved to Mount Shasta from New York City in 2013, she has been teaching piano both at College of the Siskiyous and Southern Oregon University. During the summer, she serves on the faculty at Pacific Crest Chamber Music Festival (www.pacificcrestmusic.com) and tours with Pacific Crest Chamber Players during the year. Another chamber music project she has is her collaboration with Michal Palzewicz as Duo Sapphire in exploring the music written for cello and piano.

Ms. Sai holds a Doctorate of Musical Arts in Piano Performance from the Manhattan School of Music. Her doctoral dissertation entitled “The Proportional Function of the Cadenza in the First Movements of Mozart’s Piano Concertos” was published by Lambert in Germany. Her debut CD of Chopin’s 4 Scherzi and 4 Ballades was released on King Records of Japan in the fall of 2008. Of this disc, the critic Yoshiko Ikuma noted Ms. Sai’s “deep identification with their celebrated creator’s genius”.