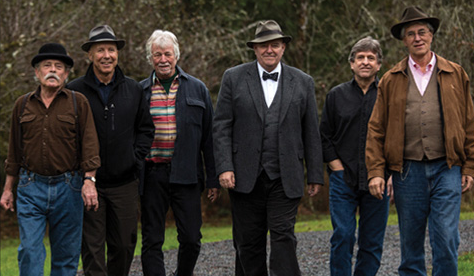 Pops is pleased to have Marley’s Ghost on Saturday, November 4th, 2017 at 8pm. Cover charge for adults is $20. Entrance is free for children under 12 year of age.

Marley’s Ghost is nothing less than a national treasure, the capable inheritors of the archetypal Americana blueprint drawn up by The Band.

As the L.A. Weekly aptly put it, “This West Coast group deftly dashes across decades of American music to create a sound that’s steeped in tradition but never bogged down by traditionalism.”

An eclectic aggregation composed of singer/multi-instrumentalists Dan Wheetman, Jon Wilcox, Mike Phelan, Ed Littlefield Jr., Jerry Fletcher, and Bob Nichols – the band can sing and play anything with spot-on feel, from roots to rock, blues to bluegrass, gospel to stone country, which is what they’ve been doing – to the ongoing delight of a fervent cult that includes many of their fellow musicians – throughout their first quarter century as a working unit. Their trademark multi-part harmonies never cease to captivate, whether on record or in live performance.

The band celebrates its 30th anniversary with the release of The Woodstock Sessions, helmed by Grammy-winning producer Larry Campbell. Known for his artful work with Bob Dylan, Levon Helm, and countless others, Campbell guides the Ghost’s dig into its garden of deep roots to uncover a host of hidden gems. Featuring its trademark multi-part harmonies and multi-instrumental skills, the band’s 11th album is a resonant road trip through America’s past set firmly in the present.

The winning chemistry between Campbell and Ghost has already set yet another recording project in motion — a gospel album, a genre beloved by both artist and producer