Allison and Victor are performing at Pops as part of their LOVE & UNITY Tour for Valentine’s Day Weekend.

Allison and Victor were the “Music Pick” for the Spring Edition of Southern Oregon Magazine 2015! and featured again in the Summer Edition, 2016.

Together they create a fusion of musical forms 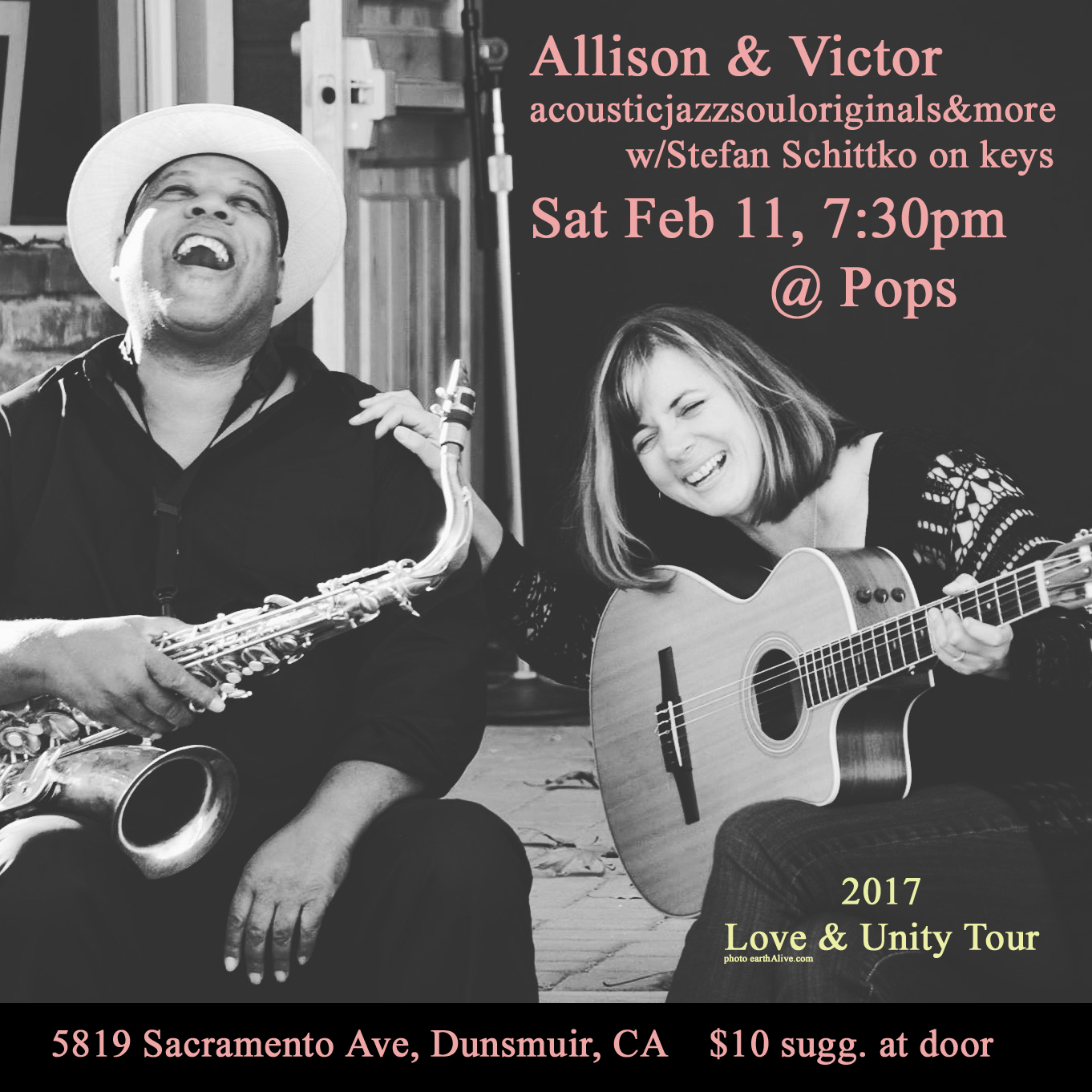 uniquely their own. They blend roots music — a fusion of jazz, folk, blues, a little funk, originals and some jazz standards laced with some French lyrics. Allison learned French alongside her sisters, where she grew up in Belgium. Victor was born and raised on the East Coast in Delaware.

As a duo, Allison and Victor have shared the stage with The Blind Boys of Alabama, Tuck and Patti, Walter “Wolfman” Washington, Craig Chaquico, Shana Morrison, Archie Lee Hooker, Acoustic Alchemy and blues legend John Hammond. Their constant performance schedule has contributed to their growing fan base on the West Coast. Their music has also struck a chord in the wine country of Northern California and Oregon as well as the festival circuit. Mostly performing as a duo, they have also developed a show with a stellar array of musicians.

Allison and Victor have released several C Ds?, From the Back Burner, Allison Scull and Victor Martin Live, and their most recent Cool Like The Breeze CD. They are laying the ground work for their next CD currently.

Allison and Victor have performed at the longest running festival on the Oregon Coast, the Oregon Coast Music Festival. Other festivals include Nor Cal? Jazz Festival, Art and the Vineyard (Eugene, OR), the Napa Artisan’s Festival, the Shasta Yama? Festival (Mt. Shasta, CA) a Taste of Redding and more. They also have perform at State Fairs and other venues including Lassen National Volcanic Park, the famed Derby and Genghis Cohen in Hollywood, and even an Olive Oil Company. Allison and Victor also perform for house concerts and private parties.

This duo, along with Allison’s twin sister, Suzanne, organize Jazz in the Canyon, a four day, multi-venue event in the historic train town of Dunsmuir, CA. Stay tuned for more details. Typically this event has been over the 4th of July weekend but it will be announed for later in the year.