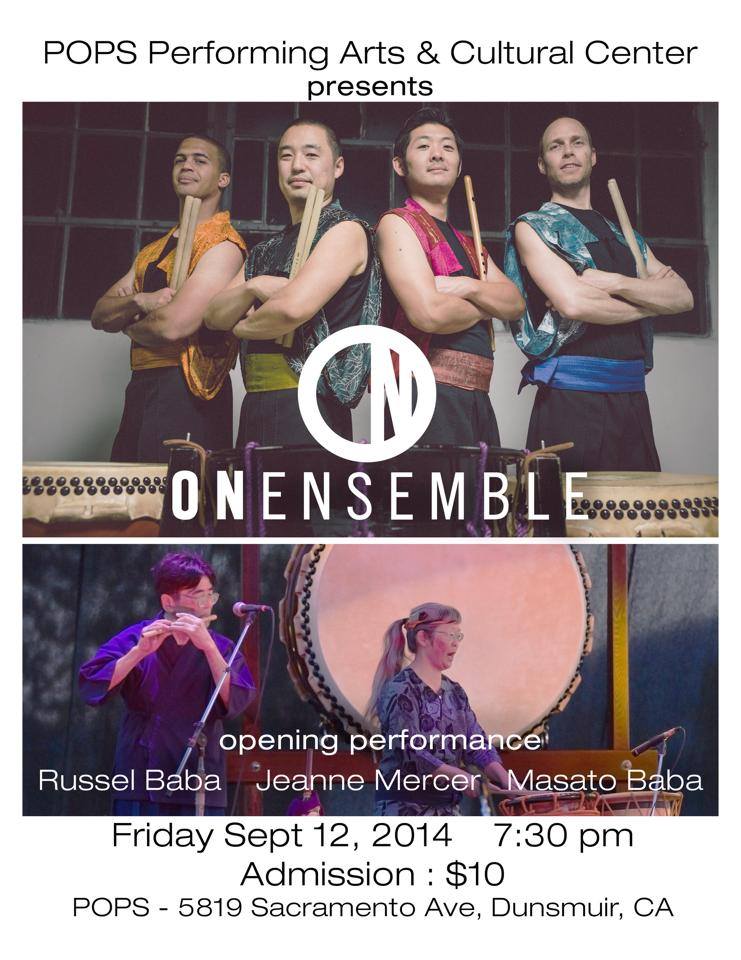 On Ensemble from Los Angeles and Russel Baba and Jeanne Mercer from Mount Shasta will be performing an evening concert at Pop’s Performing Arts and Cultural Center in Dunsmuir on Friday, September 12 at 7:30 pm. A door charge of $10 is being asked.

On Ensemble is at the forefront of a growing artistic movement in the taiko (Japanese ensemble drumming) world. Founded by childhood friends Shoji Kameda and Masato (Maz) Baba, On Ensemble has made a name for itself by infusing the powerful rhythms of taiko with overtone singing, odd meter grooves and soaring melodies. Their fearless musical explorations have taken the ancient instruments of taiko into new realms and have established a distinctly modern expression for the art form. The group’s unique sound has been praised as “completely original and brilliantly conceived.” Modern Drummer magazine calls On Ensemble “an exciting taiko ensemble looking at new ways to apply traditional Japanese drums.” In 2013 On Ensemble was the first American taiko group to be invited to perform at the National Theater of Japan for the prestigious Nihon no Taiko concert series.

Shoji and Maz were taught taiko at an early age (8 and 6) by Maz’ parents, recognized American taiko pioneers Russel Baba and Jeanne Mercer, who founded Shasta Taiko and started one of the first children’s groups in the United States. Russel, Jeanne, and Maz will open the show. The trio, Tadaima (I’m here, I’m present, I’m home) will perform original works for taiko with fue (Japanese bamboo flute) and saxophone.

Coda magazine compares Russel’s saxophone sound “…with the timbre and flexibility of a violin.” and adds that “His new sound is extra-ordinarily beautiful.” DownBeat magazine describes Russel as “…a strong musician who in playing his own compositions is playing himself.” and Jazz Times writes that he is “…a unique woodwind stylist…[with a]…bright, vibrant sound…” Russel has toured and recorded with jazz artists pianist Andrew Hill, violinist Michael White, and drummer Eddie Moore.

On Ensemble has been a featured guest artist numerous times for Shasta Taiko’s In Concerts Series at the College of the Siskiyous and for the outdoor taiko festival, ShastaYama. The evening concert at Pop’s in Dunsmuir is another opportunity to experience the many exciting directions of the unique and creative art form of taiko in the new intimate atmosphere that Pop’s in Dunsmuir.