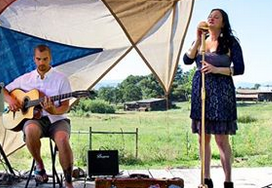 This power duo came together in the beginning of 2020 after each musician had respectively built a strong independent solo career in the State of Jefferson.
​
Dayton Mason is an Ashland native and has been inspired by Jazz music since he was very young and began playing Gypsy Jazz guitar in high school. He has played in many different duos, trios and quartets and has toured across the United States. One notable opportunity was opening for David Grisman at the sold out Rogue Theatre.

​​
Greta Gardiner grew up in Wyoming and moved to Ashland in 2002. She began as a singer/songwriter and learned to play guitar while living in Paysandu, Uruguay, and she started performing music when she lived in Lyon, France at a corner bar called 22 Rue Pouteau. Since returning to Southern Oregon she has been in 2 rock bands called Lost Maven and Organik Time Machine playing bass, rhythm guitar and vocals.
​Both musicians had decided to set local roots and play close to home in their solo careers and as they kept crossing paths in the music scene they decided to combine Dayton’s incredible Gypsy Jazz guitar skills with Greta’s vocal and linguistic capabilities, thus the Dark Eyes Gypsy Jazz Duet was born. This music transports listeners to another time and place, a corner café in old Paris with laughter and Gypsy notes flowing like the wine in everyone’s glasses and perhaps a faint memory of Django’s iconic cigarette smoke swirling in the air…