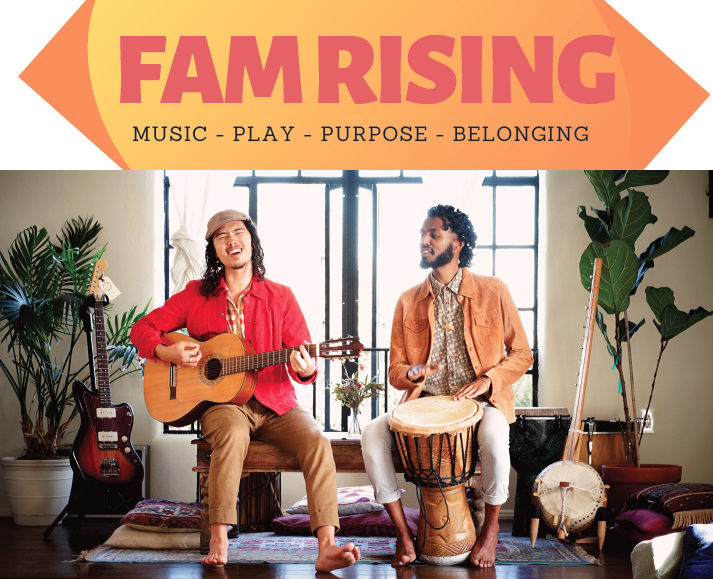 Fam Rising will be playing at Pops Performing Arts & Cultural Center at 7 pm Saturday, November 16, 2019. $10 advanced tickets $15 at the door. Kids 12 and under free when accompanied with adult.

“Our vision is a world where everyone experiences purpose and belonging, asking “where can I give what I have” rather than “where can I get what I want. “This musical experience is designed to call your soul out to play, and create a space where we see each other as who we truly are: one family. Each of us on a journey, learning new things to share with the ones we love.” –
Mazin Jamal &
Seoulstice aka Jordan Jo

On Saturday, October 12,  Pops will open its doors as a part of Dunsmuir Second Saturday. Allison Scull & Victor Martin will be performing their Acoustic Soul from 11 am to 12 pm and from 1 to 2 pm on the patio. Donations for the show are encouraged. In addition, Mount Shasta resident Pieter Kilkens will be providing $10 haircuts on the patio from 9 am to 2 pm.  Proceeds will go do fund Pops Performing Arts & Cultural Center programs. Dunsmuir Local Robin Johnson will also be selling her handmade jewelry from 9 am to 2 pm. 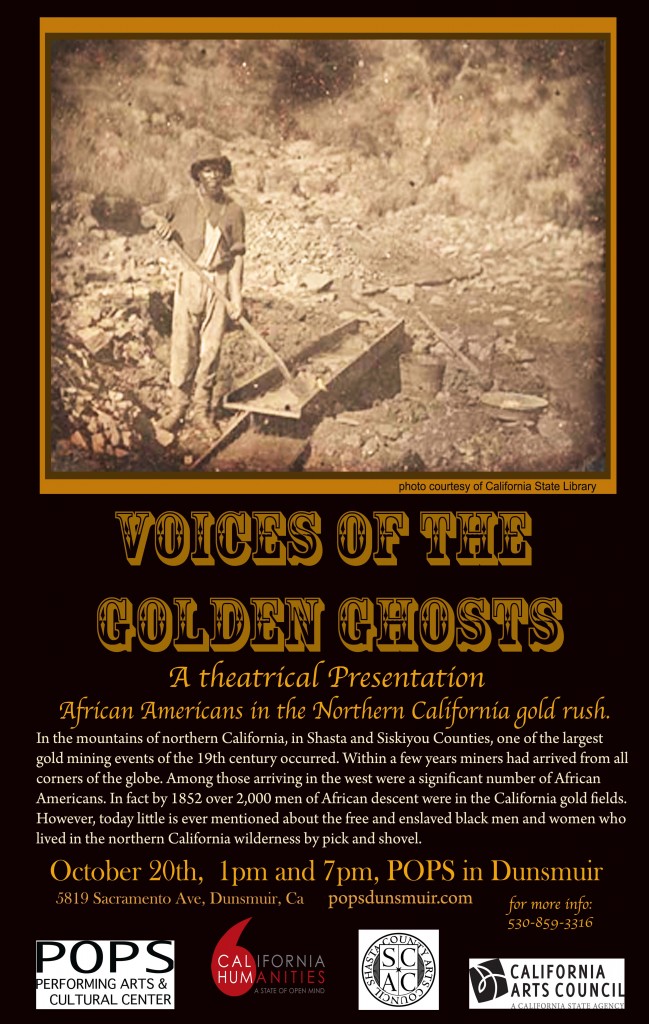 The theatrical presentation Voices of the Golden Ghosts will debut at Pops Performing Arts and Cultural Center in Dunsmuir on October 20th. The public is invited to attend showings at 1:00 p.m or 7:00 p.m.

Tickets for sale at the door. Shows at 1:00 p.m. and 7:00 p.m. $10general  $5 w/student ID
This program is supported by California Humanities through a Humanities For All Project Grant. For more info, click here.

Allison and Victor will play with their All-Star Band as a highlight for Jazz in the Canyon with Stefan Schittko on keys, Patrick Wiseman on drums and Bruce Calin on bass. The Concert will take place at 7:00 pm. Advanced tickets $11 are available online, in Dunsmuir at Dunsmuir Hardware and at Directions in Mt. Shasta. Tickets will be $15 at the door. 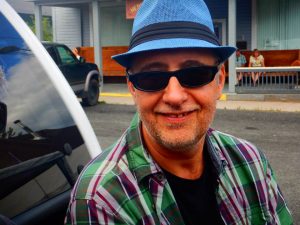 With their music recently taking them to Mazatlan, Mexico and Arizona, their sound carries a positive, inclusive message that blends roots music, original songs, bossa nova and jazz standards laced with some French lyrics. With Allison Scull performing on vocals and nylon stringed guitar, Victor Martin takes the stage on tenor saxophone and vocals. Reminiscent of bossa nova singer Astrud Gilberto and saxophonist Stan Getz. these two have shared the stage with the Blind Boys of Alabama, blues legend John Hammond and Tuck and Patti, and most recently Akira Tana and Lazy Lester.

Last year , Allison and Victor have been played  in festivals such as the Sundial Music Festival in Redding, the Cranberry Festival in Bandon and most recently  at Lassen National Volcanic Park. With a very busy season these two are also in the studio recording their fourth CD. Allison alongside her sister Suzanne Scull organize Jazz in the Canyon together. Listen Here: www.allisonandvictor.com 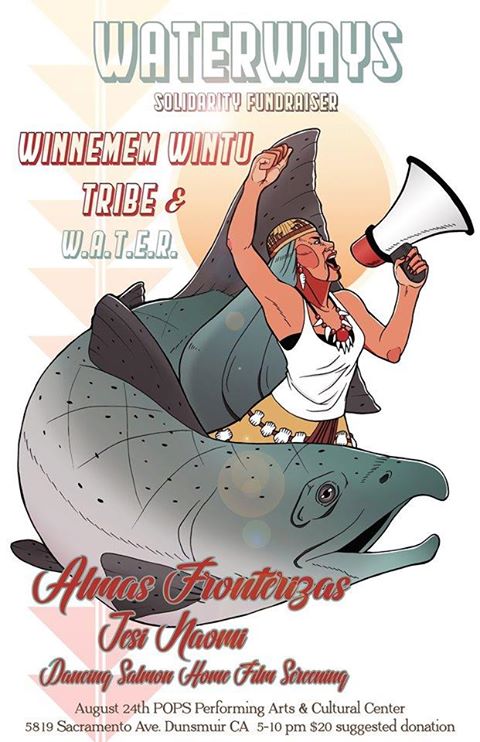 Join us Saturday August 24th from 5-10 pm in solidarity with the Winnemem Wintu Tribe and We Advocate Thorough Environmental Review (W.A.T.E.R.) coalition as we raise funds to support their work!

Help W.A.T.E.R. (We Advocate Thorough Environmental Review) and the Tribe to stop the privatization and destruction of our natural resources.

It us up to us to keep our waterways safe and out of private hands. Water is sacred! Water is life!

$20 suggested donation, no one turned away for lack of funds.
Food & drinks available by donation.
Children and family welcome!
Poster artwork by Jackie Fawn Illustrations 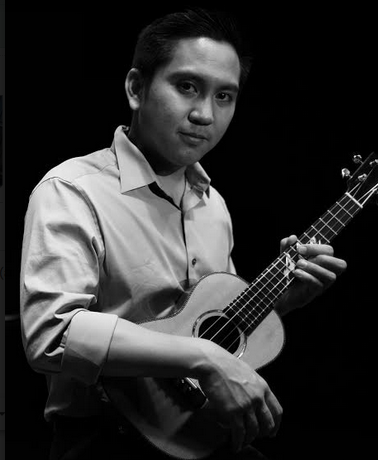 Pops is very pleased to host Abe Lagrimas, Jr on Sunday, August 4, at 7 pm for a very special evening.

Abe Lagrimas, Jr. is a musician, composer, educator, and author who plays the drums, vibraphone, ukulele, and studied at Berklee College of Music in Boston, MA. In 2012, he competed in the highly prestigious Thelonious Monk International Jazz Drums Competition and has worked with many artists such as Eric Marienthal, Eric Reed, Kamasi Washington, Dontae Winslow, Barbara Morrison, Michelle Coltrane, Jake Shimabukuro, Kenny Endo, and continues to be an in-demand session musician in Los Angeles.

Advanced tickets are $10, and $15 at the door. Pops Performing Arts & Cultural Center is located at 5819 Sacramento Avenue in the Historic District of Dunsmuir. For more info, please visit popsdunsmuir.com. 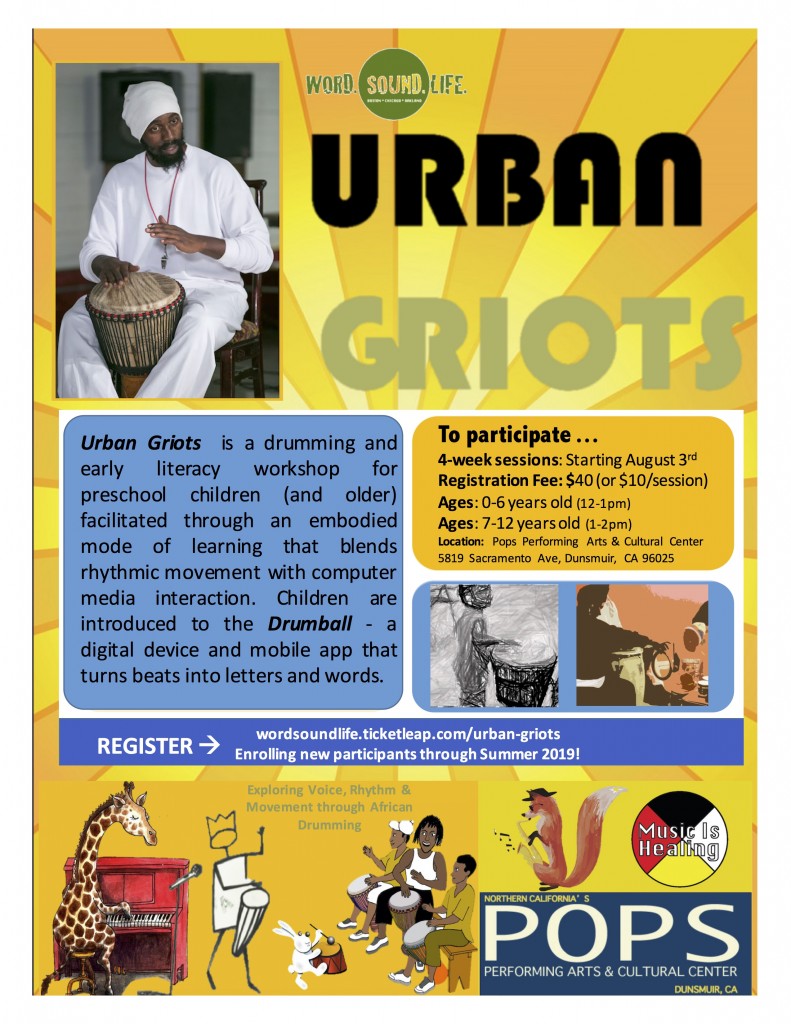 Urban Griots is a drumming and early literacy workshop for preschool children (and older). It is facilitated by an embodied  mode of learning that blends rhythmic movement with computer media interaction. Children are introduced to the Drumball – a digital device and mobile app that turns beats into letters and words.
12 pm to 1 pm – 0-5 years
1 pm to 2 pm – 6 years and older
Register  at this link.
Four-week session $10 each or $40 for the month 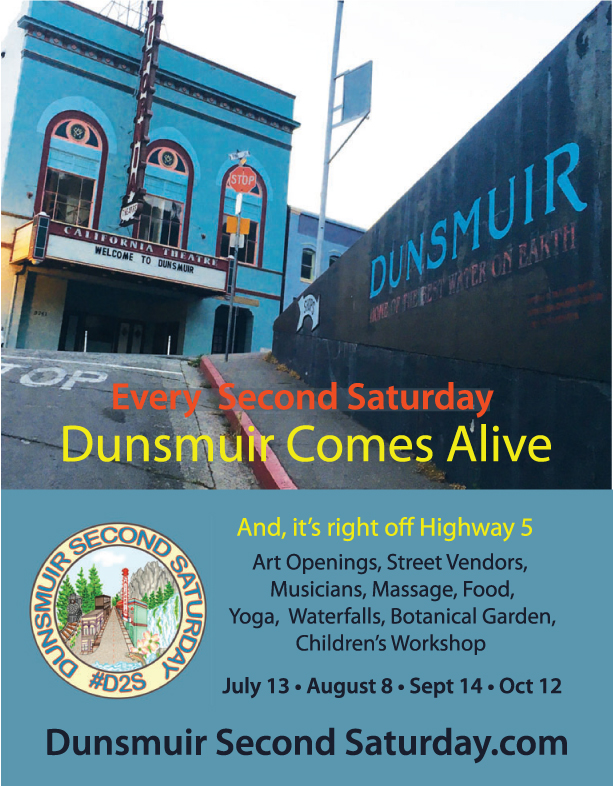 Allison and Victor and Two5Live will combine to bring a fabulous night of music. Songs will be featured from each act as well some collaboration with both bands together. Allison and Victor together create a fusion of musical forms uniquely their own. They blend roots music — a fusion of jazz, folk, blues, a little funk, originals and some jazz standards laced with some French lyrics. Currently recording their 4th CD, Allison and Victor are recording with area musicians such as drummer Kenji Kato, bassist Bruce Calin and Stefan Schittko who will be featured on keyboard in both acts for this special concert. Visit allisonandvictor.com and facebook.com/AllisonAndVictor for more on these artists.

Two5Live! is a band that blends jazz, funk, neo-soul, R&B and Latin music. It features Nathan Sivananda on bass, Stefan Schittko on keys, Victor Martin on saxophone and vocals and Ross Perry on drums. According to Schittko, this group features “a lot of tunes that all band members love and never had an outlet to play.”

Pops Performing Arts and Cultural Center is located at 5819 Sacramento Ave in historic Dunsmuir, across from the Amtrak train station. Tickets are available in advance online for $10 and at the door for $15.   For more on Dunsmuir’s Second Saturday, visit https://www.dunsmuirsecondsaturday.com/ 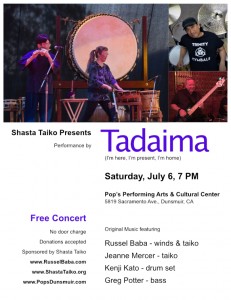 Abe Lagrimas, Jr. plays the drums, vibraphone, ukulele, and studied at Berklee College of Music in Boston, MA. In 2012, he competed in the highly prestigious Thelonious Monk International Jazz Drums Competition and has worked with many different artists such as Eric Marienthal, Eric Reed, Kamasi Washington, Dontae Winslow, Barbara Morrison, Michelle Coltrane, Jake Shimabukuro, Kenny Endo, and continues to be an in-demand session musician in Los Angeles. As an ukulele artist, Abe is a Nā Hōkū Hanohano Award (Hawaii Music Award) recipient and has released multiple albums in the United States, Japan, and South Korea. His latest album, self-titled Abe Lagrimas, Jr., was featured on the Hawaiian Airlines in-flight entertainment system. As a performing artist, he has been featured at ukulele festivals throughout the United States in addition to leading his own solo tours. His international performances include Hong Kong, Japan, Thailand, Philippines, Australia, Canada, Czech Republic, Great Britain, Germany, and toured extensively throughout China. Abe is also an educator and is the author of Jazz Ukulele: Comping, Soloing, Chord Melodies (Berklee Press & Hal Leonard), which is available in stores worldwide and on Amazon. He is currently endorsed by Canopus Drums, Paiste Cymbals, Vic Firth Drumsticks, Beato Bags, Ko’olau Ukulele, Analysis Plus Cables, Fusion Gig Bags, and Elite Acoustics. abelagrimasjr.com