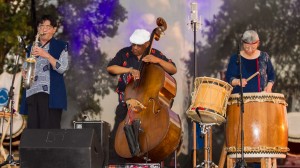 The Tadaima Convergence to Benefit Pops
Shasta Taiko leaders, Russel Baba and Jeanne Mercer, are hosting a free three day mini-music festival, “The Tadaima Convergence – creativity & diversity,” at Pops Performing Arts & Cultural Center in Dunsmuir, CA,, the weekend of July 22/23/24, Friday, Saturday, and Sunday, starting at 5 pm and continuing into the evening.
“Shasta Taiko’s goals are to expose not only taiko (Japanese drum), but a wide variety of music, perspectives, creativity, and cultures.  A free three day festival provides an opportunity to experience the extraordinary talents of Tadaima’s artists.  By making a free event, we want to attract and expose more people, including families and children, to an expanded  view of music and art.” said Baba.
The free three day festival is sponsored by Shasta Taiko and is a benefit for Pops.  Donations will be accepted at the festival in support of the Center.  Shasta Taiko and Pops have similar goals in supporting music and the arts, and Pops has created a wonderful intimate space for performances.
Russel added, “We’re hoping to perform in the Pops courtyard, outside.  A late summer afternoon or an early evening performance are our visions, barring any wildfires or smoke.  There is the option to move indoors if needed.  I hope folks will feel free to come and go if they choose to, even as we perform.  Some Asian theater traditions like Indonesian Gamalan or Japanese Kabuki, have long plays where people may leave, take breaks, and come back, all while the performances are still happening.  Gamalan may start in the evening and end with the sunrise.  I want to create that type of atmosphere during the three day music festival.”
“Tadaima” (now, at present; I am here!  I am home) is the traditional Japanese announcement when one comes home.  Music is “home” for the artists of Tadaima.
Russel Baba is known for his originality in playing and composing for saxophones, flutes, and taiko.  He has toured and recorded with jazz legends drummer Eddie Moore, violinist Michael White, and pianist Andrew Hill, and taiko with Grand Master Seiichi Tanaka and Jeanne Mercer.
“Russel Baba has managed to endow his alto saxophone with the timbre and flexibility of a violin.  His new sound is extraordinarily beautiful.”  CODA Magazine
Jeanne Mercer is a highly respected pioneering American taiko artist.  She is noted for impeccable skill, touch, and sensitivity as well as writing challenging and creative compositions for taiko.  Mercer toured and recorded with Seiichi Tanaka and contributed to movie soundtracks “Star Wars” and “Apocalypse Now.”
Jeanne Mercer and Russel Baba founded Shasta Taiko and presented ShastaYama from 2005 to 2016  in Mount Shasta, the largest outdoor taiko festival in America.
Masato Baba will join his parents playing taiko, fue (Japanese flute), and percussion.  Masato is a leading American taiko artist who is creating new directions for taiko as Artistic Director of Los Angeles based TaikoProject and as a member of On Ensemble.  Both ensembles and Masato have made several appearances at ShastaYama as featured guest artists.
Gary Fitzgerald is known for a dynamic and original bass sound.  Gary toured and recorded with Russel Baba, Eddie Moore, Michael White, and pianist Ron Hart and performed with trumpeter Eddie Henderson and guitarist Bill deArango.  He has performed twice at ShastaYama with Tadaima.
ShastaYama favorites, Michelle Fujii and Toru Watanabe, will join “The Tadaima Convergence” adding their unique taiko and dance to the event.  Michelle’s interest in taiko and dance started as a youth with San Jose Taiko.  She was awarded a Bunka-cho Fellowship to study Japanese folk dance with Master Shehei Kiuchi and served as the Artistic Director of Portland Taiko in Oregon.
Toru Watanabe’s dynamic presence as a dancer and choreographer were developed as a child touring with Japanese folk dance troupe, Warabi-za.  With wife Michelle Fujii, they formed a new Portland taiko ensemble, Unit Souzou.  Toru and Michelle are keeping traditional folk dance and taiko alive while exploring new possibilities as modern performing artists.
Joining Tadaima for two evenings, Saturday and Sunday, will be drummer Kenji Kato from Redding.  Kenji received the Wayne Shorter and Tony Willians awards from the Berklee College of Music.  He has performed with Gary Burton, Roy Hargrove, Delfeayo Marsalis, Warren Hill, Mark Whitfield, Antonio Hart, and Merle Haggard.  Kato is recognized for his studio work and is gaining a reputation as an outstanding teacher.
All of the artists have honed skills in the traditions.  All continue to create and explore other ways of expression, seeing, hearing, and living.  Tadaima – now, present; I’m here!  I’m home!
“The Tadaima Convergence – creativity and diversity” is sponsored by Shasta Taiko, a nonprofit arts organization and is a free event to the public and a benefit for Pops Performing Arts & Cultural Center.  The Festival is a wonderful opportunity to expand experiences and support Pops in the spirit of Louis Armstrong’s legacy of jazz, the arts, and liberation.
Pops Performing Arts & Cultural Center, 5819 Sacramento Ave., Dunsmuir, CA
popsdunsmuir.com