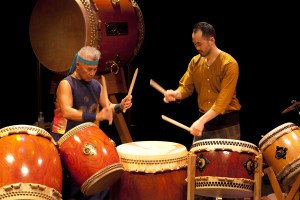 For this special event at Pop’s in Dunsmuir, Kenny Endo will perform with New York based composer and musician, Kaoru Watanabe, who specializes in Japanese shinobue flutes (bamboo transverse flutes) and taiko and Hitoshi Hamada on vibraphone and percussion. See bios below.
Kenny Endo is an internationally recognized master of Japanese drumming and one of the foremost in the field to revolutionize the use of taiko in contemporary compositions.  He is the first American and foreigner to receive a “natori” or “stage name” and master’s license in Japanese classical music.  Master Endo has performed several times in Siskiyou county.  “The Kenny Endo Taiko Ensemble” last appeared as featured guests for ShastaYama 2014.  Master Endo trained and influenced a new American taiko generation including taiko artists Masato Baba and Shoji Kameda who started taiko as children with Mount Shasta’s Shasta Taiko.
Opening the show will be Shasta Taiko’s Russel Baba and Jeanne Mercer who will perform original works for saxophone and taiko.  Along with Master Kenny Endo, Jeanne and Russel are recognized for introducing and pioneering American taiko and the performance at Pop’s will be a reunion for these accomplished artists.

Kenny Endo is a leading artist in contemporary percussion and rhythm. At the vanguard of the taiko genre, he continues paving new paths in this Japanese style of drumming even after forty years as a career taiko player. A performer, composer, and teacher of taiko with numerous awards and accolades, Kenny Endo is a consummate artist, blending Japanese taiko with rhythms influenced from around the world into original melodies and improvisation.

Originally trained as a jazz musician in the Asian American cultural renaissance of 1970s California, Endo began his taiko career in 1975 – first with Kinnara Taiko (Los Angeles) and then with Seiichi Tanaka and the renowned San Francisco Taiko Dojo, the first taiko group outside of Japan. In 1980, Endo embarked on a decade-long odyssey in Japan studying with the masters of hogaku hayashi (classical), matsuri bayashi (festival), and kumi daiko drumming. Endo has the honor of being the first non-Japanese national to be honored with a natori (stage name and master’s license) in hogaku hayashi, and has an M.A. in Music concentrating in ethnomusicology from the University of Hawai‘i. Endo’s albums include: ‘Eternal Energy’ (1995), ‘Hibiki’ (1998), ‘Jugoya’ (2000), ‘On the Way’ (2007), ‘Rhythm Summit’ (2010), ‘Honua’ (2010), ‘Convergence’ (2013), ‘Island Breeze’ (2014), and Uncommon Time (2016 release date). Endo has performed as a taiko soloist with the Honolulu Symphony, the Hong Kong Philharmonic, percussionist Kiyohiko Semba, the Hawaii Opera Theater, Orquestra Experimental (Brazil), and with American singer Bobby McFerrin, broadening the audience base for taiko. He has performed in Egypt, England, France, Germany, Belgium, the Czech Republic, England, Australia, Jamaica, Costa Rica, Belize, El Salvador, Nicaragua, the Bahamas, Bhutan, Brazil, Argentina, Canada, China, Malaysia, India, USSR, and throughout Japan and the United States. Endo maintains an active schedule performing, collaborating, composing, and teaching while also serving as Artistic Director of Taiko Center of the Pacific, a school of traditional Japanese drumming in Honolulu. Working with artists in various genre, Endo has brought a refreshing and creative approach to music through his background in western, ethnic, and traditional Japanese drumming.
www.kennyendo.com

Hitoshi Hamada (vibraphone, percussion)
Born in Hokkaido, Hiroshi Hamada began his life as a performer with the Waseda University Jazz Workshops. An accomplished jazz vibraphonist, Hamada has a Master’s degree in percussion from Tokyo Art University, having studied under Michiko Takahashi and Makoto Ariga. He received much acclaim from his professional debut with the group Takeshi Inomata & Force. As leader of an FM broadcast personalities program, he expanded his network of musicians, opening the door to collaborations. A close friend of Kenny Endo, they have been on several US tours together on top of collaborating some of Endo’s albums. Hamada’s notable records include Fox Dance and Quiet Triangle, and his compositions have received high reviews in Japan. His latest works include Metalution and Minor Resolution, collaborative albums including saxophonist Tatsuya Sato.

Kaoru Watanabe (fue, taiko)
Kaoru Watanabe specializes in the Japanese bamboo and Western flutes, as well as taiko. His music can be best described as an ever-shifting blend of Japanese folk and classical traditions with contemporary improvisational and experimental music. A St. Louis native, Kaoru eventually moved to Japan to pursue his passion. As artistic director for the world-renowned Kodo, Kaoru focused on their world music festival, Earth Celebration, where he directed shows that combined music, dance, and visual arts. Through Kodo, Kaoru worked closely with legendary Kabuki actor Bando Tamasaburo. Upon leaving Kodo in 2006, he returned to NY to teach and perform and continue his innovative work by blending conventional Japanese sounds with such instruments as the hurdy-gurdy, tabla, and ngoni.