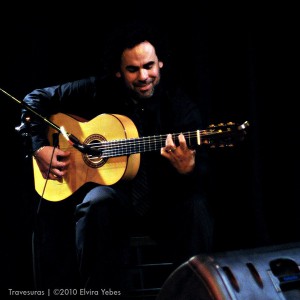 Ricardo Diaz, a well-known and respected flamenco artist, will be playing in a trio at Pops Performing Arts and Cultural Center in Dunsmuir, California on August 27th at 8 pm.  His guitar playing has taken him around the world, where he has performed, recorded and collaborated with internationally respected artists. He is known for his knowledge of, and passion for, the art, and his original compositions.

Ricardo Diaz discovered the art of flamenco in San Francisco, CA, where he began his studies with guitarist Jorge Liceaga. At the advice of his teacher and mentor Mr. Liceaga, Ricardo started traveling to Spain where he studied with “El Entri,” “Canito,” Jose Luis
Rodrigues, David Cerraduela and El Viejin from the gypsy neighborhood of Caño Roto in Madrid, Spain. Ricardo would soon begin working in the San Francisco Bay Area “Tablaos” or Flamenco Clubs, accompanying many Bay Area Flamenco artists. Soon after, Ricardo started traveling the US and Europe working with Gypsy singer Cristo Cortes and Flamenco Sur, performing in cities such as New York, Chicago, Los Angeles, San Diego, Portland, London, Amsterdam, Geneva, Marseille and Paris. This also included working on a Cruise Line in the Mexican Riviera, performing as a solo artist and with a Dance Troupe and in 2014 a tour in Japan.

Ricardo continued touring in China with a San Francisco group, led by guitarist Roberto Aguilar. Later he would appear on Shaw TV, CBC Canada, Fox TV, NBC and TF1 in France. He was interviewed in Argentina with Flamenco magazine, “Contratiempo”, and with websites such as SF Flamenco and Luna del Olivar, as well as with the SF Chronicle and the San Jose Mercury News.

Ricardo spent much of 2008 and 2009 living with in Seville, Spain, where he taught guitar and recorded his CD with top Flamenco artists from Jerez de la Frontera. He is currently
residing in the San Francisco Bay Area.